A Christian Response To - Should You Believe in the Trinity? 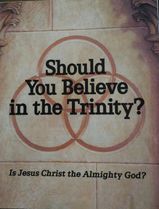 ”You Should Believe in the Trinity“ lyrics by Gary Richardson

How do they attack the Trinity doctrine?

You will find quotes from a variety of sources throughout the booklet that will trouble the average reader. These quotes (from encyclopedias, dictionaries, early Church Fathers, etc.) paint an ugly picture of the Trinity doctrine, and gives the reader the idea that to believe such a doctrine is to dishonor God. By the time the reader gets to the end of the booklet, they bring out their big guns, obviously with the intention of arousing fear in the reader:

"Soon, when God brings this present wicked system of things to its end, Trinitarian Christendom will be called to account. And she will be judged adversely for her God-dishonoring actions and doctrines... It is he (Satan the Devil) who promotes such a false doctrine to 'blind the minds of unbelievers." [Should You Believe in the Trinity, page 31]

If I were to take the quotes and reasonings as they are appear in "Should You Believe in the Trinity?" at face value, I would agree with the Watchtower Society and run away from the Trinity doctrine as fast as I can. But I suggest (PLEAD is a better word) that you do not be too hasty. It would be a good idea if you check the quotes they print in the booklet for accuracy first. Did the Watchtower Bible and Tract Society quote their sources accurately? Or, are there misquotes in this booklet; and if so, are they intentional? If they are found to be accurate, then it would be wise to reconsider whether or not to believe in the Trinity doctrine. However, if they misquoted their sources intentionally, then the Watchtower Bible and Tract Society is guilty of misleading their readers by deception into not believing the Trinity doctrine.

Let’s consider a quote taken from "Should You Believe in the Trinity?" as an example to see if the Watchtower Bible and Tract Society had faithfully quoted it accurately. On page 5 (page 6 online), they quote from The Illustrated Bible Dictionary:

A PROTESTANT publication states: "The word Trinity is not found in the Bible... It did not find a place formally in the theology of the church till the 4th century."

How this reads makes it appear that the publication they quoted from, admits the Trinity doctrine did not develop until the 4th century. But was the above quoted accurately? Did the Watchtower leave anything out that we should know about? Let's read it again... but this time we'll add the missing pieces. The maroon texts are what the booklet quoted, the green texts are what they did not want you to see. Here is the actual quote from the New Bible Dictionary, J. D. Douglas & F. F. Bruce, Trinity, p 1298:

Notice that the quote from the booklet left out a crucial point. Why? Because the Watchtower Society argues that the Trinity doctrine was developed in the 4th century, and was not believed by the early Church Fathers. If the doctrine of the Trinity was believed by them (the early Church Fathers) prior to the 4th century, then the Watchtower's claim of later developement is false.

After providing quotes taken out of context from early Church Fathers on page 7, they claim the Trinity doctrine began to developed after the convening of the Council of Constantinople in 381 C.E. On page 8 they teach:

“For the first time, Christendom’s Trinity began to come into focus.” [Should You Believe in the Trinity?, page 8]

Was it really the first time? Not at all! The Illustrated Bible Dictionary, as we have seen, actually affirms the early Church Fathers taught the Trinity. One such example is Origen, who died about 131 years prior to this supposed beginnings of Trinitarianism. In his teachings, Origen referred to “the authority of the most excellent Trinity” and that "nothing in the Trinity can be called greater or less". [Origen De Principiis, Book 1, "On The Holy Spirit", paragraphs 2, 7, p. 257]

Where did Origen get the doctrine of the Trinity from? None other than the Holy Bible! Notice who he identifies as the Almighty “which is to come” from. He quotes Revelation 1:8 and 4:8:

“And that you may understand that the omnipotence of Father and Son is one and the same, as God and the Lord are one and the same with the Father, listen to the manner in which John speaks in the Apocalypse: “Thus says the Lord God, which is, and which was, and which is to come, the Almighty.” For who else was “He which is to come” than Christ? And as no one ought to be offended, seeing God is the Father, that the Saviour is also God; so also, since the Father is called omnipotent, no one ought to be offended that the Son of God is also called omnipotent.” [Origen De Principiis, Book 1, "On Christ". paragraphh 10, page 250]

The Watchtower's President taught in their October, 2018 JW Broadcast, "You see, we are under obligation to. . . . expose false teachings that misrepresent Jehovah; and a classic example of an unscriptural dogma that God’s people have exposed, is the Trinity." Yet they stopped printing and distributing them door to door nor are they available in their carts. Seems what had been exposed, is not only their misquotes and lies, but also how they define the Trinity (see Three Gods? for more information).

You Should Believe In The Trinity

I really enjoyed the Trinity Song. I thank God for His calling in your life. Be blessed to be a blessing to those who do not know the true identity, nature & character of the one, true & only God.

Love the Trinity song you did, Gary

Good morning!Excellent article. I have noticed that the 'Should you Believe...' Booklet is now out of print ( yeah!) and only a few of its pages can be found on the official Wathtower website

Hey Frank! Haven't seen you in years! It's John from Brampton. Thanks for the update about Should You Believe. Was told their doing a reprint of Reasoning From the Scriptures. Prob serious changes