In 1990, I visited the Toronto Mormon Temple located in Brampton Ontario, Canada. This was an event when the public had the rare opportunity to receive tours inside a Mormon temple prior to its dedication. Before entering, tourists were given white shoe coverings. When I asked what they were for, one of the greeters told me they were to help preserve the new carpeting throughout the temple. I learned afterward the carpeting was replaced right after the tours were over. I was told this was not because of wear, but because heathen feet contaminated the temple; that the actual purpose for the shoe coverings, was to prevent anything unworthy to come in contact with anything inside the temple. The strictness of worthiness is such that nothing unworthy is permitted to enter a dedicated Mormon temple.

Mormons Must Be Worthy Before Going to the Temple

I've had Mormon Missionaries invite me to their Mormon churches, but never to their temple. Now if you think that the Mormon temple is where all Mormons go, you're wrong. Only worthy Mormons who receive a "temple recommend", after certifying their worthiness from a priesthood leader through interviews, are permitted to enter. With such strictness of worthiness, why do Mormons have the desire to enter these exquisite buildings? Mormon youth are taught:

“Temples are literally the houses of the Lord.

Worthiness to Enter the Temple

To enter the temple, you must be worthy. You certify your worthiness in two interviews—one with a member of your bishopric or your branch president and another with a member of your stake presidency or the mission president. Your priesthood leaders will keep these interviews private and confidential. In each of the interviews, the priesthood leader will ask you about your personal conduct and worthiness. You will be asked about your testimony of Heavenly Father and the Atonement of Jesus Christ, and you will be asked whether you support the general and local leaders of the Church. You will be asked to confirm that you are morally clean and that you keep the Word of Wisdom, pay a full tithe, live in harmony with the teachings of the Church, and do not maintain any affiliation or sympathy with apostate groups.”

How Important Are Mormon Temples to Mormons?

The dedicated Mormon could never look upon the temple with contempt, but with awe. There is also a feeling of obligation to go to the temple, for that is where they believe their necessary work is done in order for them to return to God. The Mormon Prophet Joseph Smith said about temple work:

Mormons are taught that gaining eternal exaltation and the opportunity to return to God the Father, is possible through sealing ordinances performed inside these temple walls. They believe the keys to those 'sealing powers' were lost shortly after the first century apostles were martyred. On March 27, 1836, the Kirtland Temple was dedicated. In Doctrine and Covenants 110 (hereafter D&C, considered Mormon scripture), it is recorded that Joseph Smith and Oliver Cowdery were visited by Jesus Christ in the newly built temple on April 3rd and said he "accepted this house." Other Old Testament Saints were said to have visited Joseph and Oliver as well, ending with Elijah arriving to commit to them the keys of sealing—the power to bind and validate in the heavens all ordinances performed on the earth. Mormon President Boyd Packer said:

Could a Person Enter the Presence of God Without These Temple Ordinances?

Mormons believe the current President of the LDS church "is the one man alive who is responsible for the keys that seal families and all those priesthood ordinances necessary to attain eternal life...."

The ordinances performed in Mormon temples are deemed so important, that Mormons believe God revealed such work to Joseph Smith as a new and everlasting covenant:

The LDS church declares their members who do works in their temples as 'Covenant Keepers':

What Can We Conclude From Mormon Teachings? 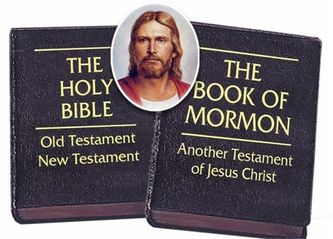 Since covering the topic of covenants can lead to an exhaustive study, I'll use an illustration to help us springboard ahead to an aspect of covenants many people do not consider. Please keep this in mind... Acceptable knowledge influences perception. A single picture can evoke different thoughts to different people. You may be shocked at what this picture from a Mormon tract reveals to me:

I see this picture inadvertently displaying Mormonism's teachings that leads people to believe and follow a false covenant. Some reading this may be  asking, "How do you get that from this picture?!"

How many Testaments do you see? Three, right? Old Testament, New Testament and Another Testament. Although many of us use the word, 'Testament' as describing a compilation of Scriptural writings, the actual meaning of 'testament' comes from the Greek word, 'diatheke' which means:

Now Mormons will wholeheartedly disagree with this premise and say, "We don't teach a false covenant! There is only one way to God." In 'Ancient Covenant Restored', they point out that the new and everlasting covenant revealed to Joseph Smith, is actually the "fullness of the gospel" that had been "with God in the beginning; it was taught in the councils of eternity before the foundations of this world were laid; we have it now; and it will continue forever."

The 'New and Everlasting Covenant' as taught by the Mormon church, is really seen by them as a restoration of an ancient covenant that existed and taught throughout eternities before this world was created. It is the same covenant Elohim was obedient to by which he became Father God (for more information on this, go to: Did God Create?). 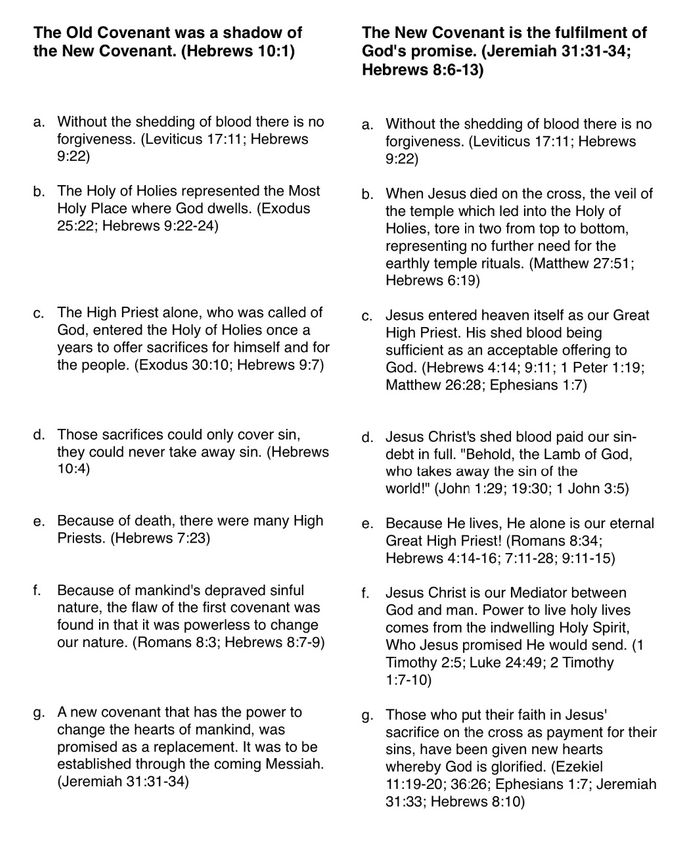 As seen above, the sacrificial rituals recorded in the Old Testament find their fulfilment in Jesus Christ, and in Him alone. Any works imputed upon individuals as requirements to enable them to enter into God's Holy Presence, is equivalent to denying Jesus Christ's finished work on the cross, and makes God a liar. It also puts a yoke and heavy burden upon people to perform vain works... works that can never save!

Hebrews 7:25 says, "Therefore he is able to save completely those who come to God through him, because he always lives to intercede for them." Those who truly come to Christ are saved to the uttermost! Jesus Himself said, "I give unto them eternal life; and they shall never perish, neither shall any man pluck them out of my hand."

I feel it is imperative that I give one final thought. Anyone who actually believes they have reached the level of worthiness by their own works to enter into God's Holy Presence, thinks too highly of themselves and too lowly of Almighty God. The righteousness God imputes upon followers of Christ is His righteousness, His gracious gift; it does not come from us. Without this righteousness, no one has the right to approach the Holy of Holies. But with the righteousness of Christ, those who truly belong to Jesus may boldly approach the throne of grace for the purpose of obtaining mercy and to find grace to help in times of need (Hebrews 4:16). That grace can be yours if you simply come to Him, flaws and all, to be renewed by the precious blood of Christ alone. The blood He shed was sufficient to save you to the uttermost.